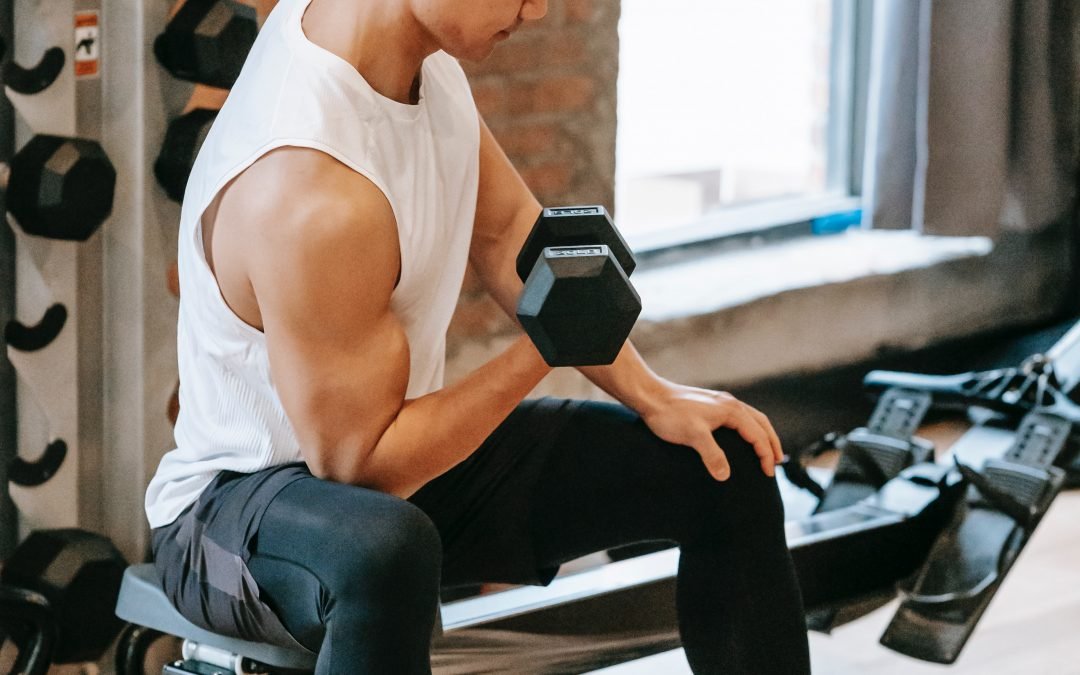 Mr X. is a 40-year-old male who presented to physiotherapy 10 weeks after a distal biceps brachii tendon repair. Mr X. works as a mechanic and regularly completes weight training. Mr X had received post-operative surgical orders to avoid heavy lifting for 10-12 weeks. This order was given to allow sufficient time for the repaired tendon to heal before returning to full activities (eg. gym and lifting at work).

During the assessment, Mr X. explained that he had injured his bicep during a gym session when lifting heavy dumbbells and later underwent surgery to repair the ruptured tendon.

As Mr. X presented to physiotherapy having already undergone surgery, it was most important to identify his previous activity levels (ie. gym and work requirements) and combine this with the post-operative surgical orders in order to create a graded rehabilitation plan for Mr X.

The bicep is responsible for flexion and supination of the elbow. It also contributes to shoulder flexion from its proximal origin. During distal biceps tendon ruptures, the most common mechanism of injury is due to sudden eccentric loading of the biceps. This means rapid and heavy loading of the biceps as it is in an extended position, such as during a fall on an outstretched hand, heavy lifting with elbow extension or uncontrolled lowering of weight in the gym. Surgical interventions are typically chosen for distal biceps tendon ruptures, in which the damaged tendon undergoes debridement and suturing to reattach the tendon to the radius in the forearm.

This injury had already been identified, though if Mr X. had presented prior to surgery I would also consider a muscle strain of the biceps or brachialis muscles. These muscles are injured in a similar to fashion to a distal biceps rupture, however, are likely to present in lower threshold injuries (ie. insufficient force to cause rupture). Depending on their severity, they may be identified through pain with palpation above the anterior elbow, and reduced strength of elbow flexion and supination. This may be differentiated from a biceps tendon rupture where the muscle is palpably retracted away from the site of rupture and the distal biceps tendon is not elevated/taught during resisted elbow flexion.

Mr X. requires a graded rehabilitation plan in compliance with surgical orders to protect the healing tendon whilst allowing the progressive strengthening of the upper limb and shoulder girdle. Mr X. was allowed to continue with his usual ‘pushing’ exercises due to the limited loading of the biceps. Early exercises specific to the bicep focused on loading the tendon within a shortened ‘inner’ range to avoid excess tension on the tendon. This included a combination of resisted exercises targeting elbow flexion and supination. To strengthen other muscles within the kinetic chain in order to prevent excess bicep loading, Mr X. was also given some basic wrist, shoulder and scapulothoracic exercises, although strict ‘pulling’ movements were not introduced until later due to their biceps load. Progressive strengthening was done to introduce longitudinal tensile loading to the collagen structures of the tendon, allowing physiological adaptation to load over time. With sub-maximal loading, this provides stimulus for healing and collagen deposition. Alongside strengthening, early mobility exercises were important to maintain maximum elbow range of motion – Mr X. had completed most of these exercises prior to presenting to physiotherapy. This included active elbow flexion and extension plus scar mobilisation to prevent end-range stiffness and avoid the formation of enlarged Keloid scar tissue. Eccentric loading into full elbow extension was limited at this stage as this is a position of maximum biomechanical load on the tendon, thus exercises were maintained within flexed elbow positions.

Mr X. will require ongoing physiotherapy until he has achieved a full return to activity with the tolerance of said activities. I expect this will take 5-6 months post-operatively. Mr X. will require sessions every 2-3 weeks within this time to allow adequate time to develop tolerance to new exercises and then progress exercises at follow-up.

Within future sessions, rehabilitation will be targeted towards regaining strength and control through a full range of motion, with a particular focus on eccentric strength in the later stages. Resistance band and cable machine exercises will be particularly useful in replicating the true demands of eccentric loading whilst providing Mr X. with control through the full range in his exercises. Once Mr X. has progressed to a stage of sufficient limb symmetry (eg. 90%), exercises can begin to focus on any specific gym- or work-related activities that Mr X. is interested in returning to. This will likely include a progressive return to heavy loading through a deadlift exercise.