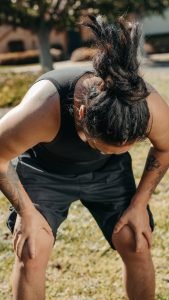 What is Patellar Tendinopathy?

Patellar tendinopathy generally occurs when the load on the patella tendon exceeds its capacity, causing pain localized to the inferior pole of the patella. Under normal conditions, the tendon responds to load by stiffening. However, abnormalities from non-optimal loading patterns can cause disruption to the collagen fibres that make up the tendon.

What does the Patella Tendon do?

The patella tendon is a structure situated below the patella (kneecap) connecting the patella to the tibia (shinbone). Its role is to transfer forces from the quadriceps muscle to your upper shinbone through the patella.

The level of pathology has been described by Cook & Purdam (2009) and follows these proposed stages:

With acute compressive or tensile overload, the cells undergo a non-inflammatory proliferative response causing thickening as opposed to stiffening. This generally occurs through unaccustomed physical activity.

Attempted continual healing following a reactive stage but with increased breakdown of the matrix. On a cellular level, there is an increase in the separation and disorganisation of collagen.

This stage is typically from overloaded tendons.

In this stage, there is an even higher breakdown of matrix, such that some areas may undergo apoptosis. Pathological changes at this stage are generally irreversible.

Malliaras et al. (2015) have proposed an evidence-based program for patellar tendon rehab, as pictured below. Generally, principles of treatment follow the following stages:

Progression through stages should be individualised, based on pain experienced a test of pain provocation, such as the single-leg squat. A score of 3 or less on the VAS scale and at least 1 week of exercises in a stage had been performed, progression to the next stage should take place. When stage 4 exercises are able to be completed with acceptable pain, full return to sport can commence (Breda et al., 2020).